Cuba Time is not a saying, it is a phenomenon that I believe also can be called island time because no one is in a rush and no one is ever on time. After 1 hour of waiting for our excursion and drinking strong Cuban coffee at 8 am in the lobby of our hotel we started to have doubts if anyone is coming for us at all.

After our driver showed up he said that he was late because his car was in a shop getting fixed. That is Cuban favorite excuse and it didn’t surprise anyone because cars in Cuba are as old as my grandpa. His car was this elite old pink corvette. He said: “Not your transportation, this is for photos“. After photo session this man drove us in second vehicle to nearest town of Veradero where we were transferred into a third vehicle to finally start our journey to the capital. There was 5 of us and so we were not scared to transfer vehicles. You just have to look at it as an adventure because if you are too punctual of a person, you would already go crazy after waiting for 1 hour to begin with.

I happened to have the privilege to sit at the front so I started the conversation with our driver:

–  Aaaa, no. If your dad is Frank and you are Frank that means you are Poquito Frank, comprende?

After this phrase I started to realize that Poquito is not only going to be our driver and guide but also a stand-up comedian all in one.

We were rolling through green areas of country pretty fast as for an old car.

– Hey Poquito, what is the average salary in Cuba?

– And how much do you make on excursions?

– I make more than a doctor! See, I have Ray-Bans.

He pointed on his sunglasses and wide smile appeared on his well-rounded mid age face.

The weather was in higher 30`s Celsius on this late April day. There was not a single cloud in the sky. I could feel drops of sweat rolling down my back.

–           Then at least make music louder and how old is this Chevrolet with no seat belts anyways?

After this shocking number we all agreed that jeep appearance didn’t change much since the 30’s. 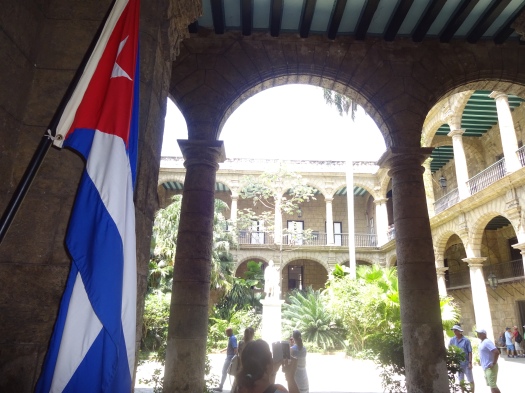 We asked him a lot of questions about Cuban communistic regime. He said government is the biggest mafia and he kept repeating “Remember, it`s Cuba? Crazy country!“.

I really think this sunny weather has a lot to do with positive mentality of its people.

Two hours later we walked through squares and brick roads, smelling a mixture of sweat, cigars and blooming flowers that cover cracks of old buildings on the balconies, spotting Capitolium and hanging out in square of Revolution.

There was extremely hot and exhaustively exciting day ahead with cheap Legendario rum, snacking on a fresh food market and stocking up on Romeo and Juliet cigars, participating in bribe given to the road police, lining up in a wrong bank to exchange some dollars for the CUC and learning that there are 2 currencies in Cuba. We also will be discovering a statue of naked woman riding the chicken with fork in her hand that represents modern art, visiting huge cathedral with statue of my favorite Pope Saint John Paul II, visiting gigantic Statue of Jesus Christ on a hill with breathtaking view of Havana and the ocean, watching local kids play soccer right next to us…

Poquito was extremely proud that Fast and Furious 8 got filmed in Havana.