Going to Paris I was honestly sceptical about all the “Love City” stories I`ve heard over the years. I must confess that after feeling this city`s energy – I changed my mind. You cannot not fall in love with Paris, you are doomed!

Bastille Day or Day of France (14th of July) was a brilliant day to arrive into the capital and to meet up with my old friends. I have never seen a fireworks and light show of this calibre. It was an absolutely stunning show above the elegant Eifel tower.  The theme of fireworks didn’t surprise anyone – it was “Love“.

Stairs were rapidly spinning as I was going up the tower of the Notre Dame de Paris. I felt dizzy and could barely recognize my sister from other tourists but I kept going. Not everyday life gives me the opportunity to imagine myself being an Esmeralda in The Hunchback of Notre Dame by Victor Hugo. 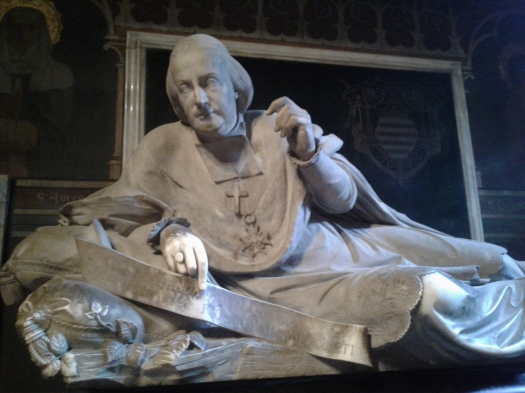 Notre Dame de Paris Gurion creatures that steal human souls have been sitting on this roof for centuries. My favourite one was tiredly holding his head with both hands and fixedly looking down, searching for his next victim… 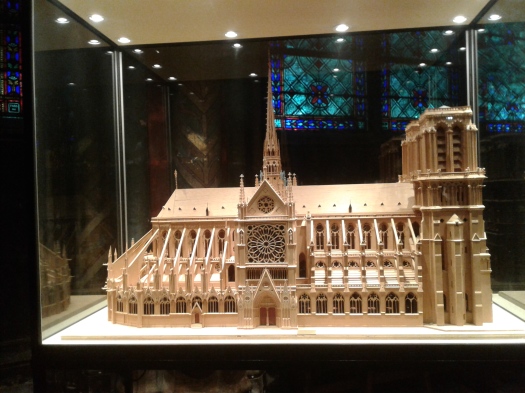 We sneaked a peak into the mass inside the cold gothic thick walls. Sacred organ music touched my soul and I was nearly crying. Being religious all my life I do not often feel what I felt inside the Notre Dame. 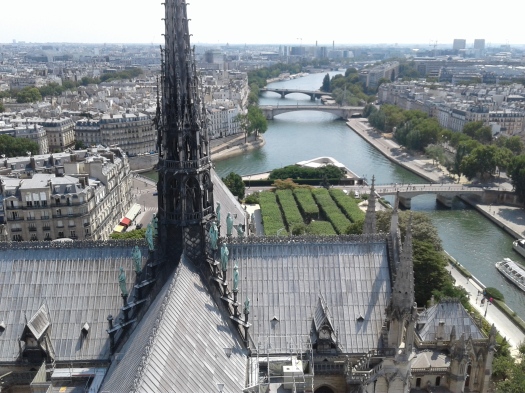 The world’s most famous French Gothic cathedral gets dramatically lit at night.

Not far from Notre Dame is La Sainte-Chapelle which was also very appealing. We couldn’t find this catholic church at first as it was conveniently tucked into one of many inner backyards of busy Paris. Overall it is impossible to not get lost in circled arrondissements of the city.

If you want to feel like a princess walking through gardens, surrounded by ponds and magnificent architecture of the 16th century – Louvre museum is the place for you. Before Versailles palace, this was the main residence of the French Kings, originally built as the Louvre castle in the late 12th to 13th century under Philip II. And don’t forget to see famous Mona Lisa and Venus de Milo in the world’s largest art museum – 72,735 square metres to be precise. 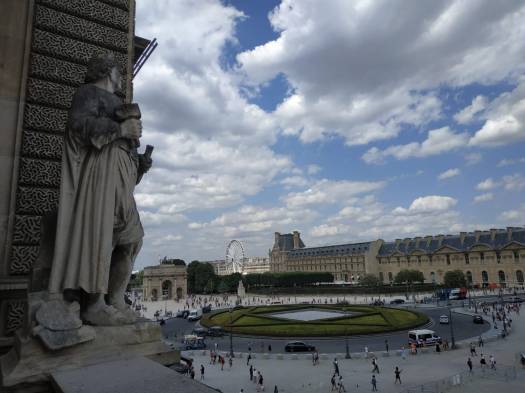 French people are extremely patriotic. I had an honor to be in Paris when French won the world cup for the second time in the entire FIFA history. To say that it was crazy on the avenue des Champs-Elysees and Arc de Triomphe is to say nothing. Insane parade and celebration lasted for two days: First day for winning and second day for proud football players and French president Emmanuel Macron returning from Russia and bringing the World Cup home. 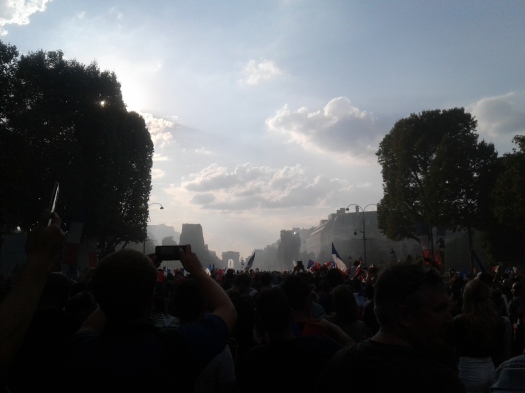 People were climbing poles and monuments and waving national tricolor flag from the highest points possible. I could hear fans loosing voices over this exciting moment in history. 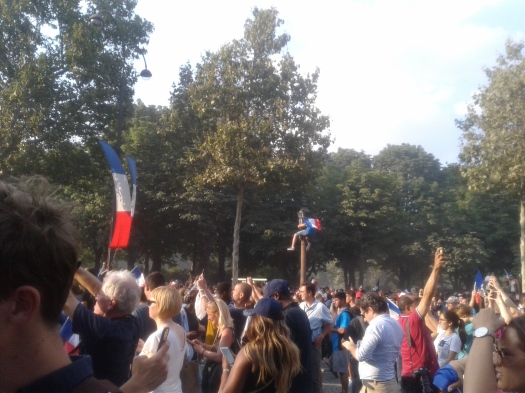 “Allez les Bleus“ soccer song (pronounced “allay lay bleugh”) is imprinted in my memory for a very long time now. My sister’s boyfriend and I sing this song to each other until this day because it cheers us up and brings back unforgettable memories. Fireworks, broken glass and unbelievable air show was followed sardine style subway ride home.

If you are somehow strange as me and like the dark side of tourism – Père Lachaise Cemetery will catch your attention in a heart bit. This is where Édith Piaf, Frédéric Chopin, Jim Morrison and incredible number of famous folks are resting forever. 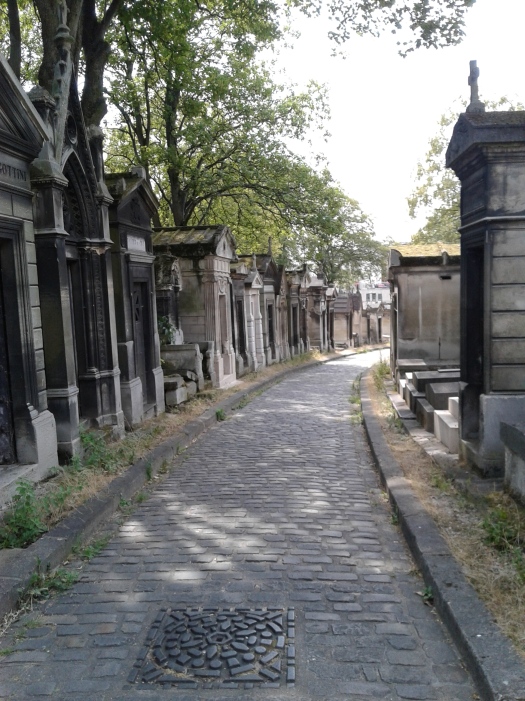 Take the street car to go up the hill to indulge yourself in the glory of Church of the Sacred Heart of Jesus, Montmartre. Standing tall this pure white cathedral provides the picturesque view of the giant city of Paris.

One young couple was making out right on stairs of the church. I hope God will forgive them, it is Paris after all.

Traditional duck dinner with crispy garlic potatoes and a salad must be eaten on a nice little patio outside of Le St. Jean restaurant, Montmartre. 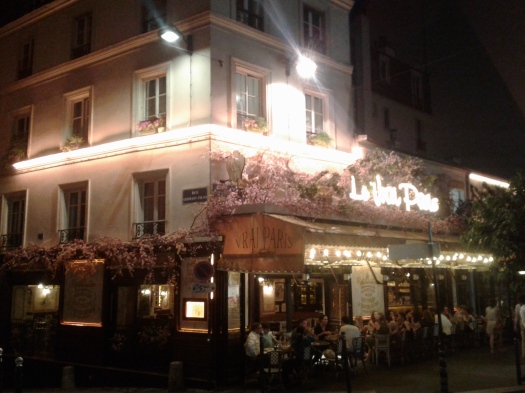 Walking down from Montmartre through hilly streets and numerous restaurants with patios and flowers on the balconies you will also see portraitist in action. This neighbourhood is famous for its artists. 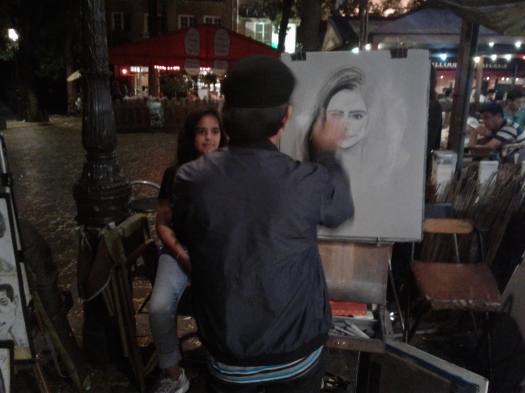 All the way on the bottom of brick roads down from Montmartre you will see so very familiar red mill of the Mullen Rouge. Feels like I have been here already because of musical Mullen Rouge with lovely Nicole Kidman and Ewan McGregor. 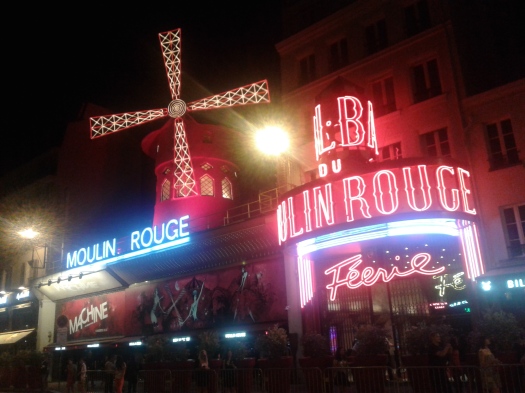 Seine river boat tour is a great way to see all of the main tourist points like Sorbonne University and Latin Quarter where people dance Salsa on a board walk, Notre Dame de Paris, Eiffel tower etc.

Old but lively and detailed statues eyes were looking down on us from the bridges sides as we continued our ride. I also spotted some people jumping off two bridges: Drank too much or really wanted to go for a swim? I really don’t know. What I do know is that there are definitely many reasons why France is the most visited country in the world and love in the air is probably the main reason. 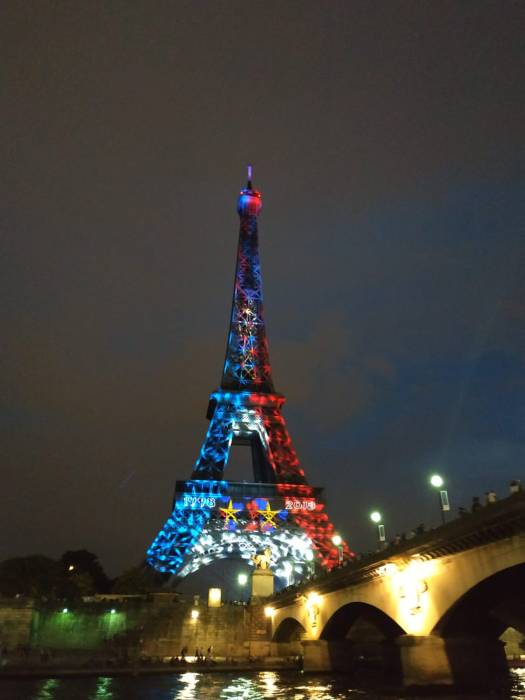 And since that trip I am only buying baguettes instead of bread.